Alliance Council is structured and operates according to the rules set out in The Standard Code of Parliamentary Procedure – except where clarified or modified by the Alliance Constitution and Bylaws.

Voting for members of the Executive Committee is carried out at the first business meeting of the Alliance Council business year as defined in the Constitution and Bylaws.
Vote tallying, scrutineering and counting is performed by an Election Committee, convened exclusively for this annual election.

The order of elections is:

Back in March 2017 we amended Alliance Bylaw 7 to include specific language and procedures about how Supporter Groups would be recognised.

For the 2019 Season the following four (4) Supporter Groups are recognised by the Alliance Council:

There is one (1) inactive Supporter Group:

Are you interested in standing for Alliance Council – and representing your fellow fans, Season Ticket Holders and Alliance Members?

First read this quick overview of what is expected. Still interested? Here’s the quick guide.

Before you start you will need:

Note: your Alliance Membership number or Season Ticket Account number is in the SoundersFC App under MatchPass, on your printed MatchPass or contact your Ticket Rep. If you are not the primary Season Ticket holder you will need to be designated to one of the seats using your current email address.

Voting is hosted and managed through The Club. In order to nominate first go to the voting site. You can access this directly at https://vote.soundersfc.com or  by navigating through the Sounders FC website. Supporters – Democracy In Sports – Nominate and Vote.

Note: the Login/Sign up button on the front page of Sounders FC website is for the MLS affiliated website – it’s worth doing – but won’t help you with nomination or voting. 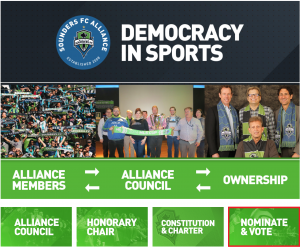 Once at the Nomination and Voting page you will need to login. This is where your email address associated with your Alliance Membership or Season Ticket is required. You will also need your Account Number.

You will see a list of Available Ballots. This is where all election and votes will be listed – including GM Vote Of Confidence, Alliance Council elections, Constitution Ratification etc.

To nominate yourself – click Nominate Myself. Fill in the short bio, click Next and Submit. You are done and on the ballot.

Next step – talk to your friends and fellow fans and get their votes!

Alliance Council are reaching out to the broad Seattle Sounders fan base to look for insightful questions that you want to be asked at the Annual Business Meeting.

Representatives from Club Ownership, Front Office, Playing Staff and Alliance Council will be present at the meeting.

The call for questions was closed just prior to start of the the Annual Business Meeting.

The Alliance Council Business Year started on 1 December 2017 – and with the new year we welcomed new members, said farewell to those leaving Alliance Council – and also elected a new Executive Committee.

The full 2018 Alliance Council roster can be found here. As new members join we will update the list.

Heartfelt thanks to those who left the Alliance Council. Every individual gave time and worked to ensure that the Alliance grows stronger and the fan experience improves every game.

Recording of the Live Stream of the 2017 Alliance Annual Business Meeting.

This event was held at The Ninety on 8th November 2017.

As the Alliance Council, representing Alliance Members and fans of Seattle Sounders FC, we recognize and celebrate the diversity of our communities.

Alliance Council and Supporter Groups have worked closely with the Sounders FC throughout the years around the fan experience inside and outside of the stadium.  We gave our strong opinions back in September following a series of incidents. We know that Community is important to all of us, and we continue to have a regular face-to-face engagement to advocate for and represent all fans.

We have seen how Alliance members and fellow fans have not been treated as expected – both at home and last weekend in Vancouver, BC. As fans we have been left frustrated, angry and confused at the vacuum in communication around these serious issues. We encourage all Sounders fans to respect and support each other as a community.

Alliance Council recognize our Club Ownership and Front Office for their continued support – both visible and otherwise. We applaud our Ownership in issuing a jointly signed, though delayed, statement of values: “At a human level, we believe these values to be non-­political. Speaking up for equality is simply the right thing to do.” We believe their statement was originally intended to be stronger, and we believe the dilution and the delay to be caused by MLS decision-makers.

Alliance Council look beyond our Club to Major League Soccer to provide a clear statement of values that recognizes the diversity of the fan base. The silence in this matter is deafening, disappointing and cowardly.  The decision made to eject our fans last Sunday was wrong, and the silence surrounding the decision is wrong.

Soccer is a global platform of inclusion and unity, and even a common language. Soccer is love, passion, and lifelong devotion.  It is these commitments that create the very foundations of Clubs around the world that have existed for more than a century.  Fans first, MLS.  Fans first.

Thanks to Jeff Williams and Roberta King for their content and for reviewing this statement.

SEATTLE, WASH. – On behalf of its Ownership Group, Seattle Sounders FC today issued the following statement on the heels of Sunday’s first leg of the 2017 MLS Western Conference Semifinals:

“Seattle Sounders FC is aware of the events that occurred within the club’s supporters’ section during the first leg of the 2017 Western Conference Semifinals at  BC Place on Sunday evening, where two travelling supporters were ejected for holding a sign that read: ‘Anti-­fascist, anti-­racist, always Seattle.’ We would like to reassure our fans that both the league and our club believe strongly in inclusion and acceptance. Tolerance and inclusiveness are pillars of our society, and ideals we take seriously as an organization. At a human level, we believe these values to be non-­political. Speaking up for equality is simply the right thing to do.”

Alliance Council have been working directly with the Sounders FC around the entire fan experience since before the first game of the season.

The multiple changes for entry to CenturyLink Field, the move to clear bags and limits on sizes of purses have presented many challenges. We continue to present our experiences and concerns to the Club – and encourage all fans to report issues as they occur. Please stay in touch with your ticket representatives and provide details of any concerns or issues (time, gate, person’s name if possible).

We are fans too. We enter the stadium through the same gates and experience the same security teams. During the season we have seen a repeated lack of consistency in the application of gate policy. As stewards of the fan experience we have collected this repeatedly and brought it to the Club.

This past weekend many of our fans reported a range of unsatisfactory experiences. Yes we listened, yes we flagged these immediately post game with our Front  Office representatives.

As fans we won’t see the inner workings of the Club. This is similar to an iceberg. We see the ten percent above the waterline.

The joint statement from the Sounders FC and CenturyLink Field is much like this. We – as fans, as Alliance Council – are not privy to the internal conversations and activities of the Club. I can imagine there were meetings across different groups – and these are likely sensitive.

What we do know is that the Club is listening to us all – Alliance Council, Supporter Groups, and every individual fan who provides feedback. We expect our Club to always celebrate and support the diversity of the fans and our broader community.

What we expect from our Club and the stadium at this time is inclusive, welcoming and consistent treatment for every fan. At the gates. Inside the stadium. Every time.